Click the links below to learn about our teachings and practices.

The Byrdstown Christian Church (Disciples of Christ) was organized July 16, 1917, when William C. Kirby “Bill C.” Smith met with a group of people in the old Pickett County Courthouse.

The land where First Christian Church now stands was donated by Charlie and Manza Reagan. A contract to build a new church was awarded to Major (Babe) Guffey and Walter Smith. The foundation of the church was made from rocks hewn by John Morgan. The lumber used was dressed poplar. During the construction of the original building, just after the framework and rafters were up waiting for the roof a big storm blew the building into the nearby field. More time was spent collecting and cleaning up the debris than was spent on the building before the storm.

The church building debt was quickly paid off by private donations. A local banker, John Lacy, headed a drive to pay the debt by challenging people to donate and offering to double their contributions. A dedication service for the new church was held and after a sermon by Bill C. Smith, the first minister to serve the church, everyone enjoyed a big “dinner on the ground.”

The church was heated by a huge “pot-bellied” wood burning stove in the center of the building. Brass oil burning lamps hung from the ceiling for lighting until the 1930s when electricity became available. Grady Holt along with James and Richard Huddleston served as janitors, sweeping floors and building fires for one dollar per month. Porter Clark served as custodian of the church for many years. He was also responsible for ringing the church bell each Sunday morning. He donated his services to the church. 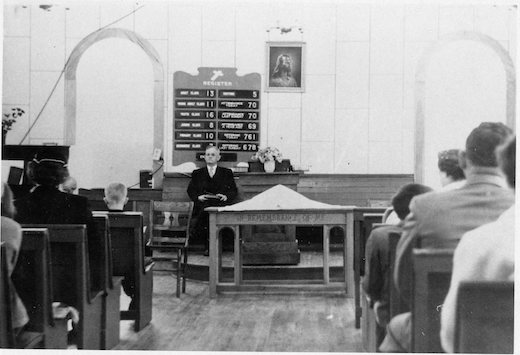 On September 3, 1944, the chuarch voted to raze the old church building and build a new one. The lumber in the old building was to be sold to help defray the expenses on the new building. This order was re­affirmed by the church in March 1948.

In April 1948, Everett Asberry, Sam W. Groce, Porter Clark and possible others began tearing the old building down to give space for the new building. When the old building was cleared away, Sam W. Groce came with his mule-drawn slip scoop and begar “scooping” out the basement. Everett Asberry took turns operating the scoop with Mr. Groce until the job was completed.

Carpenters for the new building were Ben Bilbrey, Harlan Lee and Porter Clark. Mr. Clark, being a member of the church donated his entire labor bill. His three grandsons, Everett, Edward and James Zachary worked as helpers, doing odd jobs and donating their work to the church.

During construction the congregation began meeting in the old high school auditorium for worship service where they continued to worship until the new church building was completed in 1949.

In 1964 Gilbert Evans was awarded a contract to build two wings to the church to provide more seating space in the sanctuary and office space for the minister. This addition was completed in 1965 and was paid by individual pledges and special church offerings.

On June 23, 1968, a resolution was passed by the congregation requesting that the Byrdstown Christian Church’s name be removed from the Annual Yearbook of the Disciples of Christ. 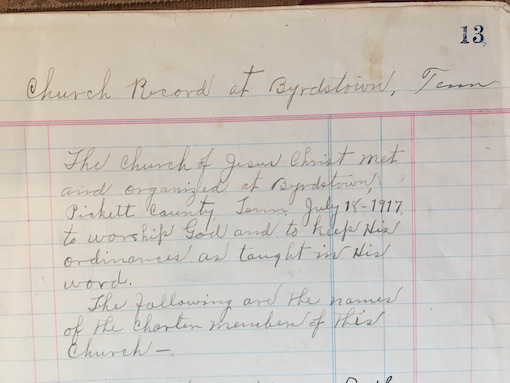 Over the last century First Christian Church has followed many traditions, some have lasted only a while but others remain today. Some of our traditions involve holidays and others, like church dinners, have been carried on since our beginning. We may not eat “dinner on the ground” anymore but it certainly rates as one of our favorite events. Vacation Bible school happens EVERY summer, youth and adult bible  study groups take place on Wednesday nights.

In February you will  find us looking for the perfect white elephant gift to wrap for our Valentine’s Day Social. Each passing birthday and anniversary is marked by putting money in a special can. No one remembers how this tradition began, yet it continues today.

On Christmas Eve you can experience the glow from the candlelight service. After the Easter service the ground will be sparkling with brightly colored eggs for the “young at heart” to find. If the community has an event, you can be assured that we will participate.

Take a look at some of our traditions...
Call Us
Directions
Get Connected
Review Us